The CQC.  It was one of those nights at the Kings Fund, at a quiet little Soiree with the Head of Hospital Inspection of the CQC, Professor Sir Mike Richards just having a quiet little Health Chat with Roy Lilley (NHS Managers.net – just in case you haven’t read the e- newsletter – “it’s more than a blog”!) (And you can see the whole thing, here) 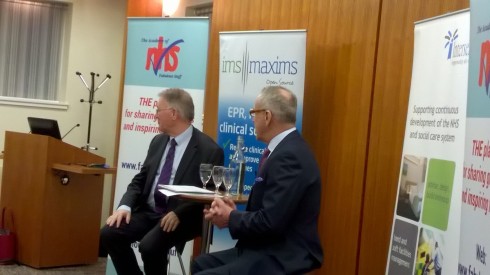 Roy Lilley has not been backwards in coming forwards with his criticism of the whole concept of inspection actually being of any use whatsoever. ( So, there were many present – at a sold out meeting – who may have been there for the blood sport?)

As ever with these missives – this is my view of the evening, and my opinions.  I spoke to a few people afterwards, and questioners at the meeting, who all seemed to think it was a score draw.  Both protagonists remained intact, neither hit a killer blow, and most of the audience could feel positives on both sides of the argument.  I still lean more to inspection being too rear view mirror, too mired in ‘you have to find something’, and more remembered for the negative than the positive.  I shall attempt to remain as neutral as I can, but don’t hold your breath!

We get the Deming quote (“Fourteen Points of Management”) up front from Roy (but that was after his introductory “As you know, I can’t stand the CQC”.)  “Deming’s 3rd point was “cease dependence on inspection to achieve quality”.  Sir Mike smiled a little.  But we did get some insight into his back story first.  It did feel a little like we were waiting for hostilities to begin though.  Occasional sharp intakes of breath, but it was just a chat before it got serious.  Sir Mike Richards had been Oncology Czar (National Cancer Director)- and he felt this and his board level involvement at Guys and St Thomas’s(?) had equipped him well for his current role.  To be fair, the strides taken in diagnostics and screening – and borrowing best practice from other health economies all sounded like very powerful statements of effectiveness in the cancer field.  “But why should you be chief inspector of hospitals when you have never run one?”.  This was Roy attacking The Elephant in The Room.  Sharper intakes of breath…but good answer “I don’t do it on my own”.

The CQC is Peer review with teeth, is the argument.  There was discussion on cost “It only costs 0.1% of the turnover of a hospital to have the inspection”.  And I agreed with the assertion that running a hospital well is cheaper than running a hospital badly. Hospitals inspected that had a poor quality of care were more likely to be in deficit.  There were great stories of hospitals that had been in  a parlous state, with some assessed at the inadequate level, and others needing special measures, who had managed to turn things around.

OK – this is where I began to hyperventilate.  I get the positives; External and Independent review could be the best cheap consultancy you ever had; There will be blind spots and mistakes in every hospital, and an inspection could at the very least put the spotlight on that; and having a review will stiffen the resolve to get things better.

I can feel negatives though.  Even the term ‘Special Measures’ felt wrong.  Prof Richards glibly commented this had been borrowed from Education.  Lazy, I say.  It’s such a pejorative and negative phrase.  And how does a Board and CEO hope to attract the best staff if their hospital is under special measures?  Would you?  Many of the successful and “Beacon” Hospitals have had long term Chief Execs.  The turnover of Chief Execs in other less favoured hospitals is becoming a tsunami. 365 days was quoted as the tenure average now.  Would you do it?  Last October I wrote a piece about a previous Health Chat with Keith McNeill, ex CEO at Addenbrokes in Cambridge.  Roy brought the fact that McNeill had left after a poor result following a CQC inspection.  75% of the Consultants at the hosptal signed a letter asking him to stay.  And herein lies the base line problem I think.  An inspection will point out the positives and the negatives.  Human nature being what it is, 99% positives will not be seen by you as a member of staff, or indeed by your local colleagues or the Press. You only see and feel the horror of that 1%.  There may have been more problems than I have seen in press reports and from the October chat.  I haven’t read the full report.  But hounding someone out who had been headhunted from Australia, who had a different attitude – (Keith concentrated on outcomes, not inputs) – just feels wrong to me.  Maybe he had ruffled feathers?  I still don’t buy it that Board members are thankful for the CQC pointing out their bad practice.  That is maybe what they say to the inspectors face…

There was one positive action that fell out of a question via Periscope from Roger Kline. The CQC could be the engine to spread good practice.  The Academy of Fab NHS Stuff offered to be the conduit at this meeting.  I hope it happens.

But I’d like to suggest something more.  The NHS is our biggest employer.  1.4 million people. It is a people led organisation.  As Roy says (often!) show people what good is and they will get on and do it better.  We need strong, visionary involved managers and leaders.  Why not have a Sandhurst equivalent?  Why not use the methods and ideologies of Investors in People to drive up the communication, leadership and people skills in each and every hospital?  This method looks at input and outcomes measures.  Just because outcomes are harder to measure shouldn’t mean we don’t do it!