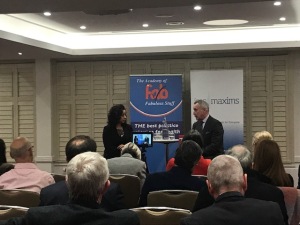 Where do you start? What an amazing, full on, vibrant and challenging Health Chat. I watched a recording on Periscope – you can too. Click on this link – it is free!

So it wasn’t just Roy Lilley being provocative at this event. Nikki batted most things back faster than the ball had come to her. Highlights? Number one has to be the thought that Roy will be prescribed Zumba classes if Nikki can just arrange that bit of social prescribing for him. Now get that image out of your head, and get back in the room!

I wasn’t there, so don’t know the audience make up. I’m guessing, as Nikita Kanani is Acting Director of Primary Care at NHS England, as well as being a practising GP in South London, that there were a lot of GPs present. I’m just guessing, as a lot of the times Roy was pushing hard about the GP contract and BMA getting too good a deal and why not use more tech and AI systems –  I did pick up some harsh intakes of breath. In France, they have protests. We have tutting and heavy breathing. I prefer it here though…

We had vested interests in the room, yes.  But anger is just another name for passion and commitment?  There will be another plan (wait for it).  And as the protagonists concurred, the agreed newly hatched GP contract is arguably more important than the NHS Long Term Plan. Certainly, if you get the first contact right (and we all agreed it really doesn’t have to be a GP), then the rest of the plan looks more attainable and deliverable. For only 9% of the budget. 93% of first contact is in Primary care.  Blooming bargain, mate!

It was wide ranging, this health chat. We started with a tangent into Community Pharmacy.  Mainly because her mum and dad still do that, after being refugees from Uganda, escaping from Idi Amin.  Could the role be extended? Certainly feels so?  If they could prescribe more? Only a handful can and do, I believe?  Patients sometimes expect a prescription?  And the pharmacist has to tell them to go to the GP surgery, to get the same diagnosis as they have already made, to write a prescription for the pharmacist to dispense? OK, I am being very simplistic here, and there are immense hurdles to overcome (legal and vested interest?).  But unless we have this sort of disjointed thought pattern and proposal, will we ever get through the GP access problems?

It seems Nikki was destined for a leadership role from early career.  And as Roy says, when you see clinicians who want to be managers too, they are often excellent leaders.  The usual, house jobs, surgery and medical- and loved all the disciplines. Loved being part of a coherent, focused and powerful team.  An aside here – she misses that in General Practice, as you do tend to feel more exposed with less support? Having said that, I’ve heard junior docs in hospital service complain that they don’t feel part of a team.  You hear the nostalgia for the way it was.  s this hearsay or ubiquitous?  You practitioners will have a better fix on that than I.

It was the leap of faith from having a great Consultant, and being in a hospital where the deputy chief exec used to have ‘drop ins’.  She was ranting and complaining to him about patients being in the wrong place, so he said why not come and work with us?  Would that still happen?  I do hope so…what a great way of getting change happening quickly.  And it served to stop her complaining!  Nikita suddenly had to make things change.  It’s all about stopping just talking about it, and actively taking action.  This is probably why Roy ranted once or twice about yet another report being commissioned and published, when two had happened already and were perfectly acceptable as the baseline for an action plan, and action? They made up a job title “Service Modernisation Lead”.  Sounded like she then did a crash course in management techniques – LEAN, Prince 2 Project Management, and more. Gantt charts coming out of her ears…

First thing they did?  Front Door Flow – and added a Rapid Assessment Team, to make sure the patient was directed to the right care at the right time.  That was back in 2005. Her reputation seemed to grow quickly.  Hospital Control Team was next. And creating Clinical Decision Units with a Care Coordinator.  Yes, all sounds obvious and becoming normal now.  It wasn’t then?

The path was so rapid to her current role, Acting Director of Primary Care at NHSE.  Although a 6 month post, not substantive, she made sure the job was openly recruited or it wouldn’t have felt correct.  I liked that.  When you view the recording of the chat, you will see why I might have got things in the wrong order.  Nikita’s excitement commitment and speed of thought means you do miss things!  She worked in the PCT whilst on her GP training. Frowned upon, but she doesn’t really care if things feel right.  DoH with CCGs (2012/13), loved having the budget and accountability.  But austerity made the job harder. She described it as the best and worst of jobs.

Let’s get some highlights of the ensuing ‘where are you today’ discussion.  I will add in my usual proviso and health check that some of the comments may be my views creeping in.  Sorry…

There’s no magic bullet, both Nikki and Roy agreed. But she does have a people plan to roll out in 2019 /20.  20 initiatives and projects. That’s a lot.

I am going to watch this space with interest. The audience sounded like they are going to as well. We were all energised by Nikita Kanani as a total force of nature. The journey will be fast and furious. If you weren’t there, have a look at the recording, and see if you want to get on the bus too.

I know that I will.

(if you want to see the health chat recording – click here ) 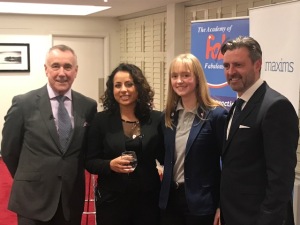 Marcel Levi – CEO UCLH
Well. We were promised an evening of conversation with Roy Lilley at The Kings Fund to give us an insight into what it’s like running one of the major NHS Trusts in the country. Roy did so himself in the past and that experience gives him a head start over most interviewers (although the Health Chats tend to feel somehow less confrontational than Humphries). We found what made Marcel tick. And I think that’s why University College Hospital seems to be trotting along quite nicely.

A rounded figure, I think. Firstly though, the final words said “thanks for being enormously frank and open”. He is Dutch. I’m sorry, I have never met anyone from The Netherlands who isn’t straight, forthright honest and startlingly open. Marcel Levi lived up to his countries genotype well, and then some.

He maybe CEO of one of the major Trusts in Britain, but he still manages to do a doctor shift or two. We got into his methodology here quickly. It’s all about style and MBWA. If you are going to do Management By Walking Around, then it’s quite useful to be hands on a little too? He did suggest that most of the the first 5 minutes when he was in the room or in the team was quite stilted, as everyone knows who he is (which in itself, is a huge positive), but then nurses start being very honest and straightforward. Junior doctors were faster. And students? Mega straight, instantly.

But is he a doctor or manager? “Both” is the easy answer. He still feels more doc than manager. The style and outcomes of both jobs are very similar. Like outpatients or managing – a 1 to 1 meeting, 20 minutes, dig for the problem, work out how to fix it (together sometimes), then work out how to monitor progress. So both disciplines help each other and dovetail well.

Dad was a doctor then hospital director back home in Netherlands. He knew he wanted to be a doctor as a young boy. Started at home. After qualifying, moved onto projects at University Medical centre. It was small enough in Amsterdam for him to know 75% of the staff names . As Roy said, that’s great, but far more important that the staff all knew who he was. And that I suppose is the key point.

He’s been around. Blimey, he has! Italy, USA , Belgium, Germany. Roy wanted to know if we were just too possessive, rose tinted, and precious about “our NHS”. Marcel thought not, interestingly. He prefers the Social Solidarity model, where the well support the ill. Loads of ideas for trying to curtail the overuse of ‘free services’. I liked the £15 fine for those triaged out at A&E who should have seen their GP. I enjoyed the empowering the patients idea, to get them to self check (near patient testing kit for warfarin then patient changes their own dose, is a perfect example). Good example too of a newer more expensive set of dugs for anti-coag being overall cheaper because there are no monitoring costs.

A bit of discussion on Commonwealth fund data and UK coming out low down the league on outcomes. Every time I hear this argument, the result is the same. We are just not comparing like with like.

Some other highlights? PFI? Government could pay it off. If it has decided to stop future contracts, then why are old ones ok now? Daft. And I bet every board meeting just has it on the agenda every darn meting if they are saddled with a large debt?

Loads of the main focus was on doing things differently. Not tied to a tired old Lansley model of privatised is best (Carilion anyone?).

Start with the patient and work backwards. There’s a worldwide shortage of all strands of healthcare professionals. So we have to do things differently. Train our own? Yes. Loads of great HCAs? Train and upgrade them, quickly. Co-payment? Maybe only logical way forward. It’s already happening in Social Care. Let’s get real here! (That’s my view…sorry…). Triage at the hospital gate – who may refer you to a GP for free, or if you want to wait 4 hours, then pay £15.

And let’s get thorny…IT interoperability. Yes, it will take time…but they are on their way. but would you start here with a blank sheet of paper?
Can I make a simpler suggestion? The machine learning algorithms will suit many a time pressured worker. But so will every smart phone owner being allowed to keep their own medical data, and let them decide who to show it to. With password break ins allowed by HC professionals. Why not? Why not? We can be trusted!

There’s lots of simple stuff we can do in between time. Ask Marcel. They have their own Bank Nurse. And very little agency spend. Primary Care Home will help fix much too. As could something similar to the Buurtzorg model from back home for the Prof?

Do you know – there’s more to see on the recording. But it really feels like there area lot of small things that could make a big difference. And a lot of big ideas that could do just as much. And guess what, it is happening already…

if you want to watch (it is a good cuppa builders and a hob nob!) click here