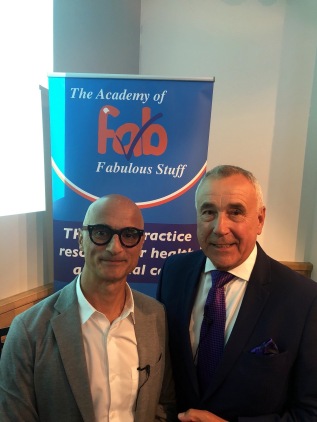 I wasn’t able to be there in person, but managed to view the recording on Catch Up via the NHS managers .net site (click here to patch through) Roy’s e newsletter. It is worth taking the time out. This is my take. And you could feel the excitement and energy in the room – I do wish I’d been there, but it’s not a bad second string to watch the recording ‘as live’.

I’d like to start at the end. What is Babylon? Take a look here www.babylonhealth.com

It offers GP consultations on your phone, in many parts of the world, and in London currently. Oh, and Rwanda – one of the poorest countries in the world. Artificial Intelligence based, the algorithm actively learns. If it makes a mistake, it’s the last time it does so. It will refer the same way a GP does, to NHS, private, or just advising. The A.I algorithm scored 81% on the GP entrance exam. The consultation (face to face, on your phone, after the initial A.I. questioning), means the consulting GP has a lot of information at their finger tips to make the consultation more efficient and effective straight away. And 1 in 10 patients does require a physical examination after the consultation, and the system makes that happen too.

Problems? Well, as Ali said, if you are getting an excellent service already from your own GP you wouldn’t sign up for the Babylon service. But many commuters, for example, might leave for the train before their surgery opens, and arrive home after it has closed. And you might wait 2 weeks for an appointment. 1 to 2 hours was the normal waiting time, and it is available 24/7.

Other problems? Just guessing there might be some vested interests from CCGs, to CQC to BMA to Royal College of GPs – as well as a lot of GPs thinking – OMG…we could lose a lot to this!

And this all feels very natural to me. It is disruptive technology. But the reality is we are 5 million doctors short worldwide. General Practice can still be the gatekeepers.  I cannot see why these two physical and technological ways of accessing help cannot work seamlessly together? Ali offered the service to a London GP who attended the chat, for £1 per patient per year. I think this meant to work alongside the normal GP service, but the devil will be in that detail?

He also said how the UK would be a small part of Babylon Health Global. So if we stop it or ignore it or don’t work out a way of it all working together, we may find we create Bell Communications, as the originator of the telephone, Alexander Graham Bell had to when the UK resisted his invention for 7 years, but then he gave up and sold it in America instead.  And remember we pushed Freddie Laker out of cheap airline flights business, with the vested interests squeezing him into bankruptcy. We wouldn’t have FlyBe and the rest without that pioneering spirit.

So, I was enticed and could see the potential, and also could see the arguments against – and why resistance is likely in the UK. Is it very different from GP@hand? (Click again, for their website). I don’t know, but would love to know more! But that has the babylon name attached to it – so is it the same service??  I feel I have more questions than answers…but I think it may be a competitor service??

Fascinating backstory: Iranian refugee. Arrived in England with no English at 16, having walked to freedom in Germany,and then on to UK. Taught himself English, then did GCSE and A levels in record time to get into Cambridge. Engineering degree and PhD (a proper Doc…) in Flow (you’ll have to watch, as I didn’t understand this part..) At 16 managed on handouts and scholarships though University and started his first company whilst doing his PhD research. Total entrepreneur (just listen to the story, and also the warmth of the applause at many stages from the audience – some of whom represented some powerful vested interests, I’m sure). He became an investment banker after his first business was sold, because they seemed to take a healthy slice of the sale. He found that work great for money, but not for him. Very long hours, and he didn’t love what he did. “I was freed by my daughter. 2 weeks paternity leave – and I didn’t return.”

Took an e learning company, had the technology platform, and content from BBC, and a box shifting company, but no engineers.  Offered to buy a company, the owner got greedy and asked for 50% more so he said no, but next day caught workers on the way in to the office with a new contract offering them 25% more. Asked them to turn up that evening at a local pub and signed many of them up, including the CEO….yes, an entrepreneur…a bit ruthless in pursuit of the goal. But always honest direct and open. You would always know where you stood.

And then we got on to Hinchingbroke. The third Cambridge hospital, when probably the local health economy needed two? His first venture into health was a private hospital, and it won awards for hospitality! It was designed by Richard Rogers and Foster. Research has shown people recover more quickly in pleasant surroundings, but when a local hospital spends money on carpets or fantastic public art, they are usually turned over by the local press quite spectacularly. Anyway, “bit of a disaster, that Hinchingbroke fiasco….they gave the keys back half way through and lost, what -about £5 million”. Now, said Ali. “It was doing phenomenally well whilst I was there”. He left Circle during the tenure. They used to have loads of staff involvement (engagement is what it’s called now…). Like Town Hall meetings. The staff were involved in the plan to turn £10 million overspend on £100 million budget into at least breaking even. Of course, there needed to be staff reductions, as 70% of NHS costs are staffing. And they managed the volunteers out happily. Then staff helped with the business planning.  Just 4 questions:

2 years after Ali left, it sounds like the place reverted to type? No Town Hall meetings, for example. Suddenly, £2m debt. Circle paid £5m to hand back the contract.

It is also possible the other local hospitals, the other vested interests and more decided to squeeze the upstart in case it became a success? I’m not sure – conspiracy is easy to promulgate.

The audience were incredibly warm to Ali. Watch the whole thing here, and see if you agree with me? There was much laughter and a lot of applause during the session, not just at the end.

I think Ali Parsa wants Babylon to work in partnership with General Practice in the UK. I fear that there are far too many players who don’t want the idea to work, yet. That’s a bigger fight than convincing a certain cohort of patients that it might work for them.

Demo of the latest Babylon system

I just hope we don’t have another Alexander Graham Bell or Freddie Laker case study in the making here.  “The doctor will see you now”,  is certainly possible if they can start in a virtual sense, just to make life far more efficient. 1 in 10 or 2 in 10 might need to be seen to be safe – but hey, waiting a fortnight for an appointment might be endangering some patients, mightn’t it?