OK. I’ve been on holiday, and just catching up on Roy Lilley’s friendly chat with Lord Carter.  (You can watch the whole thing on the NHS Managers.net You Tube channel by clicking here )

Patrick Robert Carter, Baron Carter of Coles, otherwise flagged as “Lord carter of Bog Rolls” by Roy Lilley.  I think Roy may have swallowed too many pieces in Private Eye for his own good…but I do understand good procurement can save a lot of wasted cash, so why not simplify it to the bog-rolls metaphor?

It is bigger than that, of course.  The interim report and the final report (here) is about operational efficiency varaitions across English acute hospitals.  I’ve heard Roy say many many times that all we have to do is show people what good looks like, and they will do it and maybe do it better.  It was quite strange to not see Roy’s lips move (and any who know him realise this probably only happens when he is asleep…), but I heard almost exactly the same words falling from Patrick’s lips.

Here’s my favourite sentence from the Executive summary of The Carter report (as it will always be called.  “Operational productivity and performance in English NHS Acute hospital: Unwarranted variations.” – is more of a mouthful, but does provide a neat summary of it’s own, as a report title should!)

One of my constants beefs about the contagion that is report writing is that is what many will remain.  A report.  Not an action plan.  Not helpful.  Not going to change anything.  Why could and should this be any different?  There’s the same pressures in other health care systems.  As Lord Carter said in the report, the NHS ranks as the best value health care system in the world.  Guys – he is on the same side as you!

His work life seemed to revolve about being the go-to person when something is very broken. Wembley stadium anyone?  I suppose we should have noted the project may be late when the Australian workforce started betting on the due dates being missed!  But he got in there and helped sort it.  He was also on the bid team for the 2012 Olympics – and I’m guessing the IOC would welcome some help with Rio now.

Already some of his attitudinal philosophy was spilling out. “There are a lot of good policy decisions (plans to the writers mind) being made.  Execution is often boring and bad.  Attention to detail and keeping at it are key”.  “Keep the confidence of the politicians, and get the money right”.

I loved the simplification thinking.  “What does a good rota look like?”  This really isn’t leading edge and scary – it’s day to day and practical.  “Most people respond to data”.  Don’t you love that?  Other questions on what is the appropriate level of care, which varies by ward, by hour, by specialisation.  Not a blanket “6 patients per nurse”  or whatever.

Some randomly disjointed thoughts – but all allied to simple management:

The NHS is a noble cause.  I just get the feeling that Lord Carter’s approach has identified the right bottoms to be kicked, as well as giving a super charge to the sharing and using of great methodologies and ideas.

Let’s just get the data, share what good looks like, and let them – the front line – get on with it.  Can it happen?  Yes.

One last statistic of the night.  The live feed trended on Twitter.  Roy has never managed that himself, so I suspect was deeply jealous!

(And one other place for sharing great ideas? – Lilley, Jon and the Blonde have a very fast growing forum: The Academy of Fab NHS Stuff. Go see)

Roy Lilley does get some of the great and the good to sit in the interviewing hot seat.  And go live on Periscope (available for 24 hours after the event.  And a recording is also made for FabNHS Stuff You Tube channel.  So even if you weren’t there last night, you can watch if you wish, by clicking HERE).  My views here are for those who still like to read instead!  They are my views, and mine alone, so feel free to disagree with my opinionated take on these events. 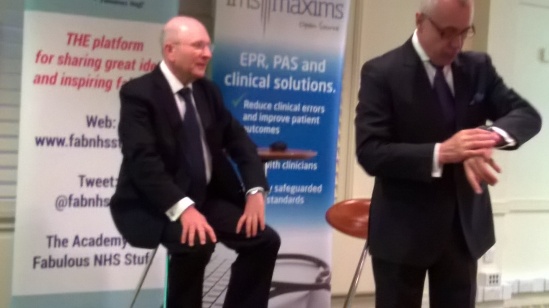 “Is that the time already?”

The fun began before we began. “I’m not Chairman, they’ve spelt my name wrong, and I am early…and how are you Roy?”.  So what is Niall’s position (pronounced ‘kneel’, in case you didn’t know). OK – he is Chief Executive and Registrar at the GMC.  Since 2010.  Until the end of 2016.  And wouldn’t divulge what his plans are after that. “No plans really Roy.  A few ideas, But nothing firm”.  Yes Roy, it’s a chat here, not a job interview!

These chats are so useful to get the back story.  Virtually every one of the people I have seen and heard have a very varied back-story.  Those who haven’t do tend to be rather more stuck in their thinking, I feel?  Many years ago, I remember Charles Handy (Management Guru) saying most people would have three careers – that is, completely different job avenues – if they stared work in 1990.  The 40 year one company career is over.  Just consider Niall’s c.v.

I felt like the journey had given him so many tools in his leadership bag. One interesting opinion from the mad pace of news correspondent life was the challenge of just being ‘on’ with very little reflection time.  I think the same happens in most change situations.  If we think about the level of tinkering or outright reformed changes of direction in our Health care system – how much reflection time is built in?  We are constrtained by short-termism.  And lack of money.  Or badly planned spending.  All beciase of lack of reflective thinking.  We all need to step back, whether giving a piece to camera on the 10 o’clock news.  Or planning how to turn a hospital deficit around….

“If you just pour more oil in, and you haven’t fixed the engine, then you will spill some”  (This doesn’t sound like a criticism of increasing spending from 7% GDP in 2007 to 11.3% – the European Average – in 2009 under Blair – but you can see the power of the analogy?)

“The enemy of all the great ideas for change is time” (I may steal that one!)

“Changing culture is really difficult” (Amen to that).

“The English only have one religion and it’s the NHS” (Quoted Nigel Lawson, now most famous for being Nigella’s dad, rather than ex chancellor, climate change denier and less).

All smiles at the end…

It did get a bit feisty.  I think Roy was attempting to get an unguarded moment.  So, questions about think tanks not thinking, the letter from GMC to Junior Doctors about not striking, (but, naturally, that wasn’t quite what I said), and where do we draw the line between social and health care.  And what about the Social Care Sector itself – becoming a basket case of inability to make profit?

The cumbersome legal process and the time taken to investigate Fitness to Practice, was acknowledged by Niall as a problem.  As was the use of weekend data at the centre of the JD dispute (in theory.  I don’t feel we gained any new ideas from Niall – just mainly acknowledgement and maybe something should be done.  I felt more politician, ambassadorial answers than open forthrightness.  Maybe that absolutely goes with the territory and the role?  Maybe that’s what he misses, and will look for in the next role?

So, should we abolish Professional Regulation?  Now, another quotable answer: “The last person to do that was General Pinochet in Chile…”.  Yes, experience and depth do matter in senior leaders.  The GMC is supportive of high standards and good practitioners, I feel.  Having a confidential help line, whilst morale is so low, is a useful innovation.  2000 docs have used it already.  The GMC is almost bound to be hidebound, and slow and sure?  But at least they do have the core value of improving practice.  If it takes time, it takes time.