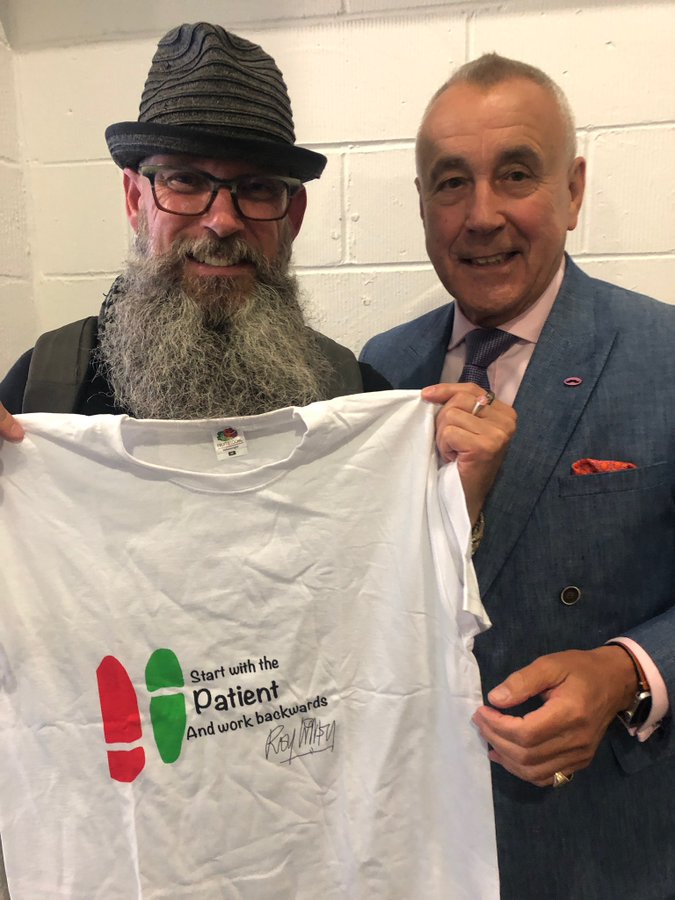 The Kilted, Bearded man and a suited dude

Digital Evangelist. That was the first description. All around great guy. Beard and kilt and pink socks? Read on!

An unusual Health Chat. Still Roy Lilley chatting and digging. Still one interviewee we would get to know more. But, out of London! Leeds, to be precise. The audience did have a spattering of other digital experts, and some of the acronyms were beyond my ken, but we got the meaning. And we had a young person to ask the youth level questions at the end. Amelia Tickell will be in Roy’s succession planning I am sure! Already a Fab NHS ambassador, once she leaves school and gains life knowledge, the world will be her lobster…

As ever – this is my take, so check the you tube out in case your views are different.

Have a gander at the one hour session. Click here. It started like one of the star wars films. Had a few giddy moments. And the second interviewer. Plus a grim story and call for help at the end. To bring hope dignity and joy to Rodos refugees, fleeing Syria and living in a building given up by locals in Greece. All the bits do link. Mainly through attitude. And belief in focusing on the good.

“Love more, fear less, say yes”. Nick had one of those life changing experiences, at the Burning Man gathering in Arizona Desert. Yes, there’s music. But mainly you learn about you by surviving one week in very hot and very dry days and very cold nights.        80 000 people. Many of them find out a lot about themselves and about others. He was impressed by the level of gifting and generosity. Food (including coconut ice cream – no idea how!). Ideas. Hugs. Positivity.

He had started in Memphis Tennessee (yes, music central for Elvis fans). Mum tells him his first phrase was saying “Mommy no sing” whilst she tried to lullaby him…Went up to business school in Nashville. Selling tech to health care organisations in USA. He liked Clinton health reforms and Obamacare. Realised the whole thing was designed broken, though. The Casino healthcare culture isn’t going to be voted on by its owners, Medicare and Medicaid? Turkeys and Christmas come to mind. Nick Adkins said he would have The NHS in preference. Describing the 13000 households who drive policy – 0.1% of households – as being rather like Game of Thrones. Except they have one throne, not 7 as in the TV series. And they control the lobbyists. He is a Bernie Saunders admirer – usually denounce as madly extreme socialist in his own country, although we might listen and hear a Lib Dem style of thinking. Tax the richest, support health care for all, and then reduce the price and cost of running their dysfunctional system. $ 3 trillion was mentioned. Is that really the cost involved? Anyway, you see where the man is coming from.

He returned from his life changing Burning Man week in the extremes of that Arizona Desert seeking to sell his original entrepreneurial venture selling into Health Care. New start up – a non-profit organisation. The #PinkSocks (Twitter handle – go look…) movement went alongside this. Still in the digital space. Forget tech fro a bit. That’s the vehicle. The people bit is an organically growing global movement, whose main secret is gifting. He did a TED lecture on the pink socks, not as he thought they wanted – more about his tele-medicine start up. That idea feels sound – ensuring the integrity and safety and security of your on line conversations and video exchanges with anyone (especially in healthcare) such that any real attack would cause the items to destroy themselves. It did sound a bit Star Trek. They went to HIMMS (Health IT Conference) in 2015 and by serendipitous exchange of views about pink socks (which he and business colleagues wear and show off) started a Twitter storm via photos with Prof Eric Topol. All the other big cheeses from all the other major players suddenly wanted to chat to them.  That’s the power of positive social networking. Maybe giving and gifting 55 000 pairs of pink socks and the photos of them becoming powerful endorsements of cross pollination, and happy positive thinking had a hand in it.  Although Nick didn’t say this, ‘as you sow, so shall you reap’ springs to mind from The Bible. And my dad’s “the more you give, the more you’ll get” both seem apposite quotes for what is happening here.

People want to do the whole thing. When he talks with the tech guys they often want to just take his idea and make the programmes themselves. But does the chef making the perfect sweet want to buy 20 acres to sow the sugar cane to harvest and process it? Or does she just get sugar delivered, and let the experts do the making?

I liked one other story. Because life isn’t all just sweet. Imagine you have a stunning cone of beautiful ice cream in one hand, and you’re contemplating that first taste. But realise that your standing in some very smelly dog mess. What do you want to focus on? The love or the crap? If you focus on the positive, realise that you have so much hope in your life, it doesn’t make the crap go away. But it helps to lessen it’s effect. It needs the positivity to ripple. Most people who you prefer to be involved with want to hug you, not hurt you. If we aim to do that thinking at least once a day, and have ‘awesome conversations in real time’, then we will ripple wide and loud, with the connections drowning out the deep fakers.

Our youth wing, Amelia Tickell asked how to make the movement more prominent in the future. Nick said forget the future. You can only live in the now. “Don’t miss it. If you live in the now, you will change the future”. Story of sending socks to first graders in El Passo. Mexican border. Been in someone’s fake news, I think? The teacher made photos and vids of the kids – social media heaven!

And it isn’t about the pink socks. They just open up the conversation prospects. You’re not a stranger anymore. He thought we should get off our phones more. “We are so connected we are disconnected”.

The ethos feels very like The Academy of Fab Stuff, sharing great ideas throughout the NHS. And the final film piece was for Roy’s visit to an ex London nurse who became a Franciscan monk. He is now helping to run an unofficial, locals supported Syrian refugee camp in Rodos. Watching that, you do realise, as Roy said, just how lucky we all are. Little things are big things. A toothbrush and toothpaste, a gifted water melon or whatever can just bring some hope, dignity and joy.

The whole message of the session was Nicks organisational mantra. “We are centred around passion. Empathy. Caring. And connection”.

You should make time to watch this. And look up this absorbingly interesting man. And view the Rhodes refugee film. And if you aren’t moved, then I will be very surprised. Links below:

The Academy of Fab NHS Stuff