Another evening at The Kings Fund in central London.  These Heath Chats where Roy Lilley (of nhsmanagers.net fame) ekes out more than Paxman ever did, by being both disarming and opinionated and sometimes rude for the sake of it…are always a good thing to attend, or catch live on Periscope, or even watch the whole again on Fab Nhs Stuff Web site You Tube channel.  As ever – these are my views of the session, so are bound to be different from your own.

I have to start with the other great reason to go. Networking.  You can chat with like and not like-minded folk, whose common denominator is wanting to keep health care in the UK at the top of the world tree.  If only the politicians would get out-of-the-way and let those who know and love it to just do it.  But I had a worrying chat with a GP leader from the East Midlands area.  They told me how the service was near breaking point. 6 surgeries had closed their doors in the last year.  That of course puts more strain on the remaining practices, and probably A&E and secondary care and all the social services too.  They told me that it wasn’t early retiring GPs that was creating the problem – which is what I had assumed.  The problem was many younger doctors leaving the profession completely. Most were under 45.  Female GP burnout was even younger – before 40.  And it does take 10 years to grow a GP – and not enough are entering training too. 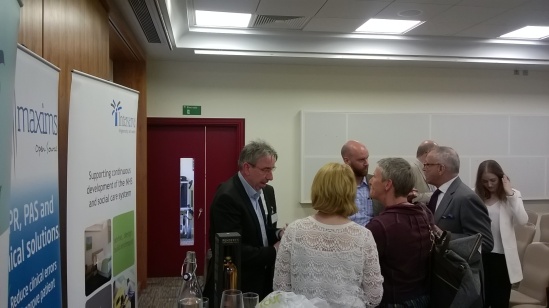 Duncan, Roy and The Sheffield Massive

I didn’t ask why.  I could guess being unloved and unsupported by your ultimate boss, Jeremy Hunt, being berated by the press, being accused of greed and of being overpaid, having over inspection by a non-understanding CQC, having to buy services via the CCG system, and trying to run a viable business and wanting to give excellence in service with squeezed resource (both money and people), and being choked by regulation and form-filling cannot make for a fulfilling work experience.

If this is being repeated country-wide, then nothing that Duncan Selbie and his team will do will have any effect.  I suppose the Tory Party knows that the voting public will never forgive a government that damages the NHS beyond repair.  And will not vote for them.  I can but hope.  You can’t be short termist and always making the Austerity choice when it takes 10 years to grow a GP.  It is not a tap we can just switch on. Here’s an off the wall suggestion. Be nice. They may not leave then.  That’s my only short-term suggestion.  And get the inspectors to hell out of there.

I liked Duncan.  Not being racist here, but it does sound interesting when a Scottish accent tells you he is Chief Exec of Public Health England…it may just be me!  He’s been a legal immigrant to The Southern Country for quite a while now…

As ever, we get more about the man with Roy Lilley’s avuncular, been there and done it, approach.  (And Happy Birthday to Roy – 70 today. Only a bit older than the NHS…).

Both Duncan and Roy had risen through the NHS ranks without the burden of a Degree.  Left school as early as they could (and I don’t mean 3:25 pm).  This sort of rise might still happen in the NHS – it seems Apprenticeships are making a comeback.  Being able to rise through the echelons of a public service seems a great way of self-improvement and making leaps across class and glass ceiling and old school tie divides.  If you are good enough, and committed enough, you should be able to break through, not just because you went to Oxbridge?

Duncan Selbie started in the NHS in 1980.  He was 17.  As a Clerk. At 19, moved to London (to keep having a job), as a Cashier at The Queens in Croydon.  Starting low, and building, as you can see.  One of the huge strengths of the NHS as an organisation.  And myriads of the audience were nodding along – because they were the same. (We have got to fight for this to be perpetuated). Hospital Administrator was the next role. with Bollingbroke saying “the old don’t need to be in hospital”.  We still need to work on this. (I am convinced that the Buurtzorg model of home care must have some utility in our system?). A move into Mental Health sounded like it was one of his favourite jobs – (Mental Health Trust in South west London out of St Georges.) He is very people centred – 3 homicides in 12 months, one a member of staff, killed.  He knew when he was on TV being interviewed that what he was saying was for his staff, not the geenral listener, who had to come in that day and do the same job knowing what happened…a great dollop of emotional intelligence.  Nigel Crisp quote from his time here?  “No-one will bring everything to a job.  What you bring will be unique.  And so will everyone else”.

When he moved on to being Performance Director of the NHS, he didn’t realise he was crossing the line to becoming a Civil Servant. Off to Brighton. Which he loved.  Being in control of nothing and totally in charge!  It was 15 minutes from disaster when he arrived.  By the time he left, Duncan said he had improved that to 30 minutes.  I bet it was nearer to an hour…His PA, Ros visited him. After observing for a day she said. “You’re having a laugh.  It’s like you are on your hols.  You only do  three things.  You wave at people.  You say ‘good morning’.  And you send thank-you notes”.  “And what’s your point?”, he said.  Listen and learn, dear reader.

Public Health England?  As Roy said – covering everything from Porton Down to Pork Sausages.  He couldn’t tell us much about Porton Down – or he’d have to wipe us all out…so we didn’t ask any more questions.  I think my conclusion was I am glad thay are so professional and on our side. At one end we have Protection of Public Health.  At the sausage end, Improvement of Public Health.  I loved their Sugar App – it reads bar codes and tells you how many sugar lumps are in the product.  2 Million users – and kids love it. The app had caused angst – amongst food producers.  So they must be heading in the right direction.  We are talking evidence led campaigns here, from Sugar levy, to other aspects of childhood obesity, to plain packaging on fags, to air quality, to smoking itelf.  And social aspects of mental health – people have to have someone to care for, somewhere to live and to have a job.  The remit sounds almost too wide to me.  Luckily, he seems to have a fantastic and well loved and respected team. (Can you go and mentor some people in the Department, please Duncan?).

Naturally, there are occasions when the advice is considered by the great and good as being rather Nanny State.  “Who are you to tell me when I should die” someone asked.  “Not everyone has your choices, Professor”, was the sensibly controlled response.

He is driven by attempting to reduce the gap betwen longevity of the affluent and those living in degradation.  The same for survival rates with various cancers.  Laudable, and grand.  But it might all start with getting Home Economics back onto the school curriculum.  Central and to the fore.

It’s the first time I have been to one of the Health Chats and left thinking, not only do I think this man will really carry on making a difference, but also, I’d love to work with him and help.