Stephen Dorrell was an MP for 35 years, and retired from House of Commons – did not contest – the last election.  There may have been a conflict of interest problem, as he was joining KPMG who were also bidding for NHS contracts.  He – as one would expect of a man who seemed properly full of integrity – resigned from the Health Committee he was (the first elected) chair of, six months before the election, as he was overlapping the old and new roles. 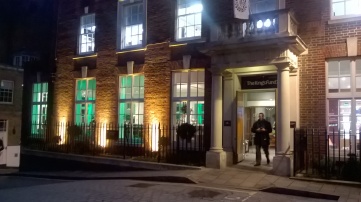 The Kings Fund by Night

This blog is my own personal views of a meeting at The Kings Fund in London, where Roy Lilley from NHS Managers.net pulls few punches and manages to pull a lot of the ‘what makes this person tick, and do what they do’ background.  It does help to see and feel where our movers and shakers get their own motivation.

Apart from the KPMG job, he is also the Chair of the NHS Confederation.  This to me (and the usual health warning – some of this is my own opinion!), looks like an organisation with almost too wide a wing span. “To be a system leader and a representative voice of its members, while giving direct support for NHS leaders giving best possible care to patients”.  Wow – laudable – but how?  Maybe for another day.  As a semi outsider, I didn’t quite get the remit…

He does come over as a genuinely nice guy, and highly committed to public service.  Yes, he does have a preference for marketization, and I sensed a bias towards ‘private is best’ (I don’t mean private medicine – just private companies creating better efficiencies and outcomes).

His background was in business – family business, in Uniforms.  So not just a career bag carrying politician.  Became a Minister of Health under Ken Clarke as Secretary of State.  The 1990 act, creating the Internal Market as part of it – the Purchaser Provider split (Purchaser became Commissioner more recently). This was one of the key themes of the chat.  One of the questions at the end was the costs of such a system.  The costs of actually having the split – administrating it, essentially, I assume – was 14% of the budget.  Those who work in multi national or Group organisations will recognise this.  Transfer Pricing and accountancy controls like Activity Based Costing all cost people, money and time to actually do them.  And to what end?  We just need more administrators and accountants to do it.  And they are going to make it opaque enough to ensure they keep their jobs, aren’t they?  Turkeys don’t vote for Christmas…I do understand that having budget responsibility is as good a way of focussing on efficiency as anything.  I think it is costly and too simplistic.  Outcomes Efficiency is the gold standard to me.  And I am sure we can never come up with the correct key performance criteria because it is much harder than looking at the input finances.  Just because it is hard to do doesn’t mean we shouldn’t try?  As Stephen said many times “What does good look like?”  And when we have that we share it – maybe through the likes of Fab NHS Stuff (got the plug in for Roy and The Blonde there…).  To change the mind-set, Roy suggested changing Commissioners to Brokers of Health Care.  Feels like re-arranging the deck chairs on the Titanic to me…possibly.

Devo Manc was exciting Stephen too.  He thought that this move (essentially giving all of the health and social care budget to the Local Authority) was as likely to have as much effect as Beveridge.  Hopefully positive effects – unlike Andrew Lansleys 2012 Act – (we will say no more here…).  The vision he offered – Holistic view of Health, Social Care, and all the agencies that stoke that fire – housing, schools etc. should be seen as a whole, not silos.  One of the difficulties is the money – who pays for it.  As Prof Brian Jarman said, 5% of the population pays for 70% of Public Health (I do hope I got that correct – I am sure Brain will correct me quickly if not!)  And one of the biggest difficulties, as Roy Lilley said, is where do we draw the line between means tested and not?  Free at the point of delivery?  But the majority are responsible for their own care costs now in Care Homes?  I think the Dutch Model (Buurtzorg) for more homecare could provide the bridge here.  And maybe we should still have Nursing Homes – NHS funded.  My definition of whether it is Care home or Nursing is if the Ward needs to be locked – then the patients are just that – long term patients, so their care should be at the point of delivery.  And we keep people out of care homes and out of Hospital by using the Buurtzorg model of home care.  Budgeting solved? 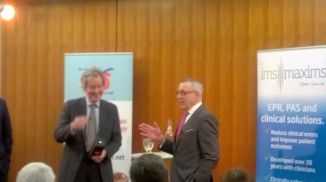 The vision for the future – Holistic oversight of Health and Social Care, like Manchester, with the centre (wherever that is) setting the standards, and the Broker/Provider split managing the budgets feels good.  The arguments will always be amongst the ideologies. What proportion of providers should be public and private, for example.  But, the overview vision feels good to me.

Stephen entered public service to be ‘on the field of play’, and to be someone who was ‘making the difference’.  I did get the feeling that this deeply held conviction was both sincere and is likely to continue for some time to come.