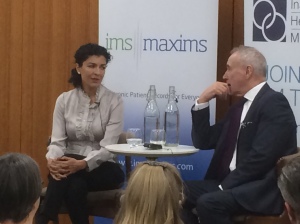 First Health Chat of 2020. Anyone who makes the link to “this provides us with 2020 vision” needs to get a life.

I didn’t quite know what to expect.  Prerana Issar is Chief People Officer at NHSI.  Roy Lilley I knew was itching to know lots more – and so were we all.

Let’s start at the end. We already knew we weren’t going to get much detail about the unpublished People Plan itself. I did hear murmurs around me “get on with it…we need to get to the plan itself”. That’s not the way one of the biggest Whitehall departments is ever going to work. Because it will cost loads, we will have to wait until the budget is done and dusted. Sadly, this may be a convenient excuse, like Purdah certainly felt like in pre-election period.

By the end of the chat, I had gleaned:

She is very real and realistic.

And Amelia Tickell, representing the young who may want to have a career in the NHS, is likely to replace Roy Lilley in the questioners chair before she has a job!!!

And 2300 people had watched this Health Chat live via Periscope. You can view it as live by clicking here…it is worth your time investment.

Amelia’s questions and Roy’s follow ups got to the real Preena. “Your first degree was Psychology  – but you didn’t use it…'”the knowledge has served me well in all the sectors I have worked in.”  What about seeing so many distressed people? What effect did that have on you? “It made me more reflective of myself”. “What advice would you give your young self? Or other young people?”. “Follow your passion. And remember that will shift and change. Ask lots of questions. And grown ups don’t know everything”.

Do I need to write any more? OK – in usual Roy Lilley fashion, we got a lot of the person beneath what we see in front of us. And she was certainly humble, articulate, passionate and feels fitted to the role. Whether frustration may turf her out, time will tell. I hope not. She is an asset, I think.

I was concerned this Health Chat might be a little combative. It’s a subject area Roy has written extensively about, and it exercises him only slightly less than the CQC. And that’s saying a lot. So a disarming start sort of confused me.

“Your mum sounds like a complete force of nature. Tell me about her.” Prerana was equally disarmed. It does sound like they were a very different – and very brave – family. And that is the bedrock of what we saw before us, and why she has this poisoned chalice of a job. Not just mum and dad. Grandmother too. Gran made sure daughter was educated. Rare at the time. First female with Masters degree. In the whole of India. Nan had two boys and one girl (Preranas mum). All three kids were equal in her eyes, for what they were and what they could achieve. Mixed religion marriage – again, brave. But maddeningly (for me), because they were liberal values driven, they suffered exclusion from the more staid majority of their peers. I suppose it comes down to being different, as we will see later.

Her career path should be a huge asset to the NHS.  She is well formed.

Unilever – India and then 110 countries. Formed a lot of her core thinking, I suggest. People need to be educated. 70/20/10. 70% on the job, 20 through coaching and 10 with formal training. (As a 23 years self-unemployed trainer, I absolutely agree). The company took risks with people, and gave early responsibility. But not ‘throw them in at the deep end and hope they don’t drown’. Push people on and give them coaching support…or as Unilever called it “Transition Support”. And that was at all levels. First supervisor to executive board arrival. Wow.  Why was it felt necessary? “Everyone needs support because it is too big to leave to chance”. I just wonder how many new job role managers and seniors in our NHS feel that support?

With 110 countries as HR head – what can you do? Some things were centralised – E.g. They wanted Performance Management to be global. But innovation had to be closer to customer, who were different depending where you were. Can you see how this might define the people plan? Norwich is different to Newcastle, Newham and Newry.  I was getting enticed now…

She now has two youngsters who ask horrid questions. She was away a lot. “Mummy, what do you do that’s more important than me?”. I might have just curled up and died. But she answered her daughter through actions. And the daughter was formed by her mothers attitude – and will be successful because of it.

Where next? 16 years at Unilever…so, naturally enough, she wanted a different excitement. She knew from the way her mum and dad had focussed her that Public Service would happen in her career. Head hunted by United Nations may not happen to everyone, though. Moved the kids to Rome. Husband commuted. She continued her straightforward attitude. Never a Royal style new paint rose tinted visits. Always aiming for real views, down and dirty – and often scary. Head office role was to be supportive of the hands on front line. I love the seeming simplicity of that statement.  Prerana said her world view shifted on her first visit – to South Sudan. “Humbling and moving”.

She realised we have it good. The country of South Sudan had no laws. And her staff teams had compassion on steroids.

My goodness  she asks powerful questions. “What gets in the way of you doing your purpose?”. Here it was 300% currency devaluation – so she fixed salaries by paying in dollars. Time off to go home was shortened due to difficult travel. Fixed too – but she wouldn’t know what to fix unless the question had been asked, and listened to – and acted upon. Isn’t it simple when you know how?

All of her experience has been about finding ways to remove barriers to what the organisation is trying to deliver. This may prove very useful in her new role in NHS.

We are so lucky to have Universal Health Care. But to keep it ‘best’ we need to keep polishing and improving. At Roy’s suggestion she joined a number of working shifts. Ambulance crew night shift was horribly enlightening. Both of the team were white. They told her she would be racially abused during the shift. Was still shocked when it happened. She realised staff see it and experience it everyday. I’m yer standard pale male and aged. I cannot imagine how awful it feels. And our own staff colleagues and friends suffer it daily. All the Protected Characteristics in legislation would count as potential hate crimes if we could take it to the law.  Prerana talked about needing policies. Sadly, my experience suggest people move onto the formal discipline section far too quickly – and sometimes use that in a bullying way. I prefer to make informal fixing the normal way. Support each other by calling it out is a good start. Telling the patient it is not right to say ‘get back to your own country’. Tell them what they are doing is not only illegal, it is horrible. Easier in GP land to have red and yellow card – it’s not emergency setting. Maybe we just need Del Boy from Only Fools and Horses to punch their lights out! (Only joking). Policy is a good start to aid the upping of the ante in the Psychological Contract, though.

“Can this be fixed” asked Roy. “I don’t know” was the incredibly honest (and excellent) answer.

Worlds largest work force strategy. That’s what the People Plan is. We got a feel for the themes – no detail until Budget of course. Addressing the enormous (and worldwide) lack of trained staff. It seems we will play proper by not stealing staff from countries were they have a worse shortage than us. Here’s the other bullet pointed themes I think I picked up (and no surprises at all).

OK – some of these might be Roy’s own hope….and some mine, even! But this really felt like the direction of travel.

What might get in the way? What barriers might Prerana and team come across? I already suspect the hand of Number 10 may be tightly holding the tiller? We will see if the plan is anodyne or incisive and exciting in due course.

It just feels that it will be led well, with passion and hugs.